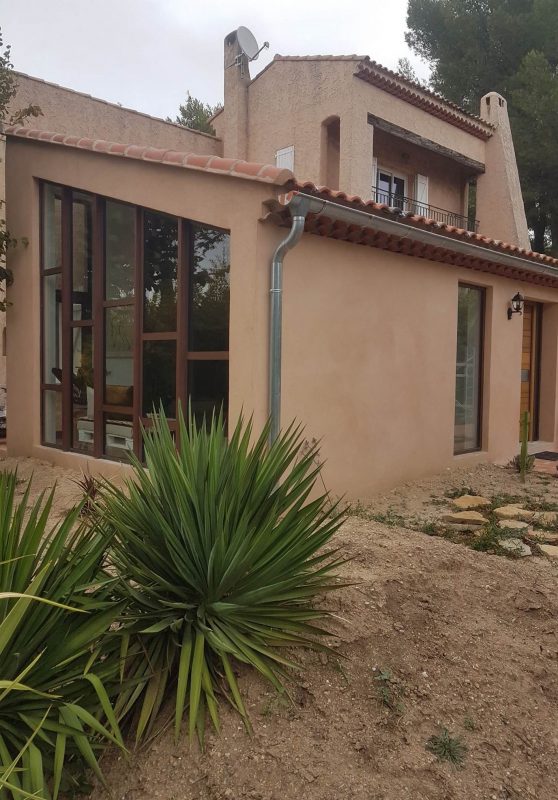 It’s Friday and this week’s article marathon is coming to an end.

During the week I have tried to explain the renovation works we had done, last winter and spring.
In November of last year I wrote an article describing the whole project, the plans and our motivations.
But I never followed up on that article, so that’s what I’m doing this week, in a 5 article marathon.

I’ve written one article for each section of the house.
Last Monday, I started with the 2 bedrooms and their small hallway and Tuesday was all about the living room and the entrance. Wednesday’s blogpost was on the fireplace project and dining room, the mezzanine yesterday and to top it all off today, a final article on the exterior (and what remains to be done).
Have you been able to keep up?

Then, let’s do this!

The changes on the outside are less impressive.
Then again, there’s a ‘corner’ of the house that has completely changed shape. The veranda where our front door was located has completely disappeared. We haven’t actually expanded the surface of the house. In m² it hasn’t changed but the cubic meters (inside) have increased a lot.

The terrace at the side of the house hasn’t changed in size nor shape. But by creating a garden in front of the new trapeze window, and with the windows that rise up to 4 meters, it has become so much nicer. This summer we have already enjoyed this terrace a lot, more than previous years.

The front of the house.

Now it makes so much more sense, the new front door is on what we call the front of the house.
We’re also happy that the veranda is gone because its’ bizar roof seemed completely out of place compared to the rest of the house.

Rearranging the garden on this side of the house, will be a next project. We’re not yet sure about planting grass again, another option would be to put gravel. Anyway, we’ll need to find a budget first, we’re not doing it immediately.

This beautiful window is just the icing on the cake.
It was when we were thinking of how to include the veranda in our interior living space and how to bring in more light, that we came up with the idea of this window.
Inside it’s great to have a big glass wall like that. But we are as happy with what it does on the outside. It looks so great.
In the evening when you drive up to the house in the street, you can see the top of the lighted window and it’s really lovely. 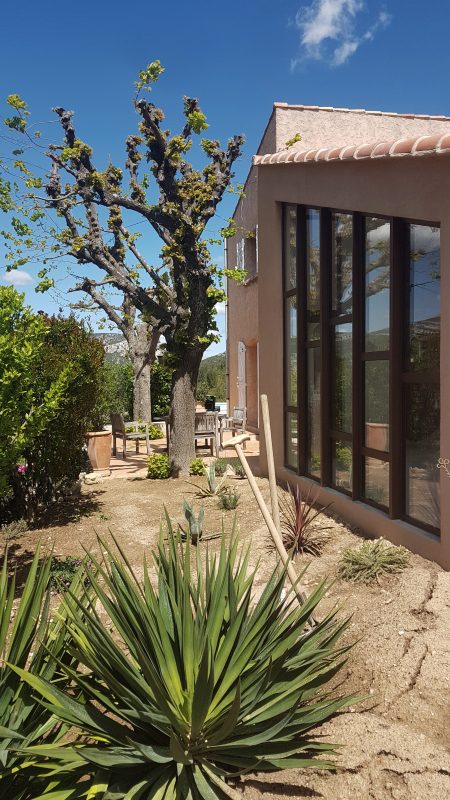 When you’re doing a project like ours, there aren’t only builders working around the house. The electrician and the plumber have to get involved as well, obviously. The advantage of that is, that you can easily have them also do all those little things that have been waiting to be done for years.
All these small jobs (changing the radiators, removing visible water piping, renewing the fuse boxes, etc.) have left traces in rooms that were not supposed to ‘take part’ in the renovation.

So now, there’s still stuff to be done, by us:

In the kitchen, we’ll have to redo all the painting, walls and ceiling. I hope to find the courage to do this at the beginning of winter. This will also be an opportunity to redecorate the kitchen. So that’s actually quite motivating.

So I’ll get back to you on this subject!

Adjoining our bedroom is a small bathroom.
Here too, it was necessary to repaint. I decided to do it in a beige that matches the existing tiling (that we still like, by the way). I actually already did this not long ago. Once I’ll have finished decorating, I’ill take some photos. Though it won’t be easy in such a small space.

The upstairs bathroom will need a small facelift as well. I’ll need to paint the walls but I’ll also need to put a fresh coat of special paint in the bath tub and sink.

In the bedrooms of our student kids, I’ve done lots of things last year.
One bedroom has been repainted in khaki, ceiling included. There are still some decorative finishes to been done because during the renovation, we put a lot of boxes and other stuff from downstairs in this room. So I had no acces to finish the room.

The other bedroom had already had an all new painted pink wall with a new industrial-looking storage system on it. Whilest the builders were breaking away part of our home downstairs, we took a weekend to move everything to one side of the room. We put up a really pretty wallpaper on the other side. I was so happy with the result.
So this room is not far from finished.

That is to say, for the time that will last. Because I like changing our interior and the bedrooms are the easiest.

If you had the patience and the courage to read all 5 articles, I thank you.

Now you know everything.
Having such a huge renovation done isn’t easy, especially when you continue to live in the house. But I realized that during all that, you’re carried by the motivation and the desire to see the result. And honestly, it’s so worth it.

We created a home that we sincerely love. For us, it’s something that contributes to our happiness.
Now, wouldn’t that be something to want to learn more about? What role our home, our save place has in our well-being?