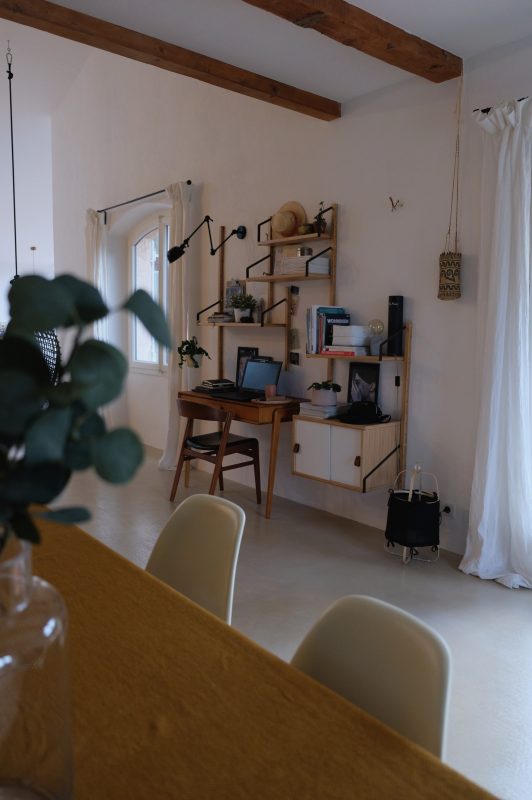 Welcome to the third day of this week in which I do a blogpost every day on our renovation that took place last winter and spring. I wrote an article on the project when it all started and since, I didn’t follow up here on the blog.
So to do so now, I give you this ‘marathon’ week with 5 articles to show you what has happened since.

Each section gets its article. Monday I told you about the bedrooms on the ground floor, yesterday about the new living room and the new entrance and today the dining room, the fire place and the office. Tomorrows’ post isabout the mezzanine and Friday I will finish with (what remains to be done and) the exteriors.
Are you still with me?

As I explained in yesterday’s and Monday’s articles, we had the floor done everywhere on the ground floor except in the kitchen, to install underfloor heating and to change its’ look. The old (red) Salernes tiles have been replaced by a béton ciré style floor.

The biggest change in this part of the house was the destruction (there really is no better word) of the large fireplace to create a project around a woodburning stove.

This fireplace (built in the seventies) was of an improbable size (with a width of 3m50) and dominated the room. It was burning wood at record speed to barely heat the house.
I can’t tell you the joy we felt when the builders started demolition on this oger of a thing!

Inspired by images seen in magazines and online, I drew the project that I wanted to have built in its’ place. We wanted a fireplace again and we’d already chosen the woodburning stove that would replace the open fire.

I chose to create a wall with two niches, one for the stove and the other for settling down with lots of cushions, to read a book or simply to enjoy the fire. I measured all the possibilities precisely and handed my drawing to the builders. What joy to see something you put on paper come to life (thanks to a very competent builder). It was exactly as I had imagined it.

We’ll, once again, be dining under the mezzanine.
Seeig as we had to extend this mezzanine by over 50 cm (I’ll tell you more about it tomorrow) the dining room is a little bigger visually. Its ceiling was full of wooden beams and as we were insulating it for thermal and sound reasons, we decided to cover part of the beams. This also calmed the rather heavy wood style esthetically.

In our former dining room we had an old wooden armoire in which we stored glasses, crockery, all sorts of stuff. But now it doesn’t blend in anymore and so we had to slightly cut off its’ legs to slide it (literally) into the guestroom.
I’m hoping to find a lovely vintage sideboard to hold at least half of what was in its ‘antique’ predecessor. In the meantime when we have friends over for dinner, we’re regularly looking for plates, glasses or the wine carafe in boxes.
But that’s ok really …

In changing the layout of our entrance (to be better understood after reading the article on the new living room and the new entrance) we had to give something up! It was the smaller room next to the entrance that I first used as an atelier and then as an office.

Even though we can work in other rooms of the house, we still wanted to create a workstation in the living room.
Opposite the fireplace, there’s a wall (between two windows) that’s just perfect for a desk. Seeing as we didn’t have the budget for the famous sixties wall system so very popular at the moment, we took the one from the big Swede. With the exception of the desk because it’s quite small; We found a bigger one online, from ‘a big french‘.

Our decorating style should remain quite calm, minimalist even, for now at least.
We have just found Zellige style tiles to put some behind the woodburning stove to create some depth in the project.

Little by little we will put things on the walls and I’d especially like to decorate with plants, but we will take our time for all of it.

We had however put aside a budget for lighting. We didn’t have that many before and since the living room has gained 40% in surface area, it was needed.
I am delighted with the 2 huge rattan pendant lights found at Couleur Locale, especially at night when they are lit, it’s super pretty and cozy.
We also found a small Alinéa wall fixture, for the entrance and in the reading nook, which we also like a lot. And over the couch there’s a wall light from La Redoute and a glass pendant light from Kwantum, in the Netherlands.
It’s great to see what some lighting fixtures already do in home decor. 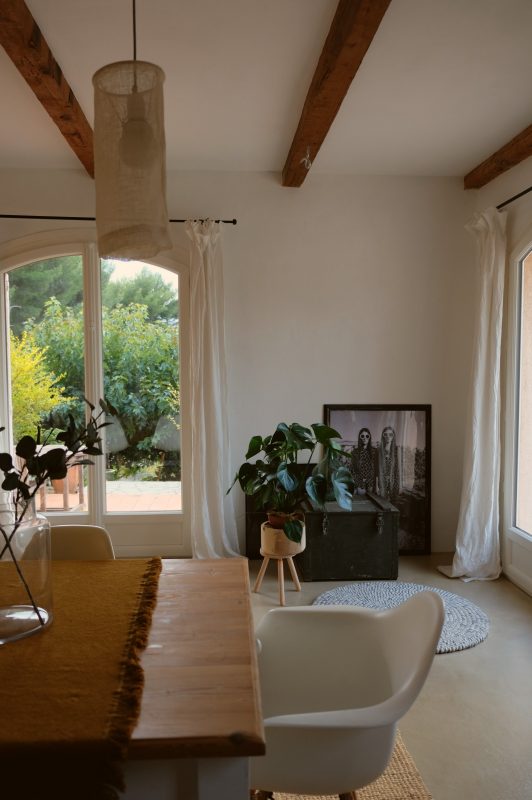 So much for the renovation of this section of our home! Tomorrow I will take you upstairs, onto the mezzanine, to our family room. No big changes took place here, but still enough to deserve a blogpost.