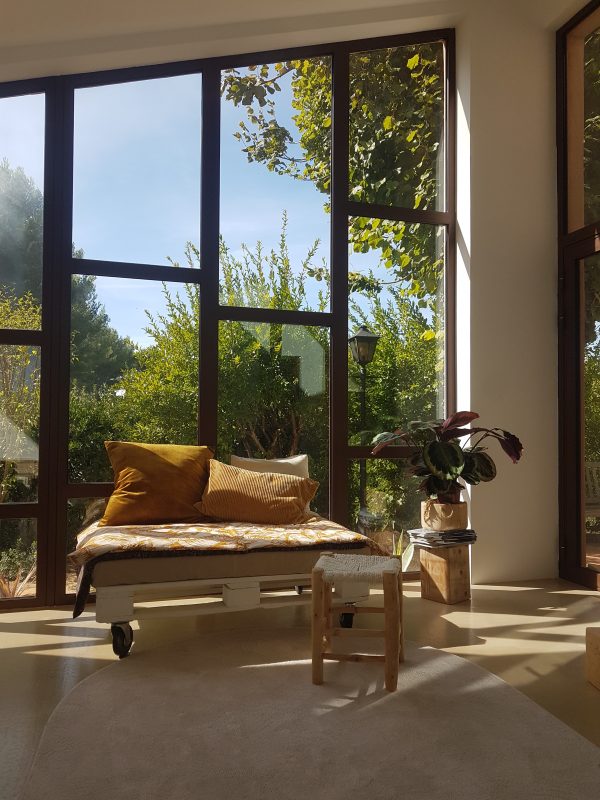 In yesterday’s article, you may have read that this week I’m looking back on our renovations that took place last winter and spring. I had explained the project in an article at the start of the building works but then since then, no more news on the blog.
That’s why I wanted to do this marathon week of articles, to have an overview of what has been going on in our home.
One article per section of the house, which means; The bedrooms on the ground floor yesterday, the living room and the entrance today, the dining room and fireplace area tomorrow, the mezzanine on Thursday and I will top op the week Friday with the outside and what remains to be done.
Are you still following?

Today’s blogpost will cover the part of our home that has been changed the most.
It was here that everything was taken down and built back up again. The layout of this part changed completely.

At the very beginning of our project, when everything was still just an idea, we got in contact with an architect to help us with the technical side of things and develop our ideas. But he didn’t have any ideas than our owns to submit to us. Also, after our appointment he left to work on it and we acually never heard from him again.

Our (fantastic) builder, on the other hand, who had been recommended to us by friends, was incredible! He’s the one who worked with our plan to suggest his own creative ideasand he showed us what was possible and how.
So in fact, we did the entire project without an architect!

The walls of the entrance and of the small office, including a bearing wall, were demolished and the builders made a new bearing wall which separates the new entrance from the living room. In order not to make this wall too long, it had to be extended with a metal beam supported by a round steel post. The post will remain visible, it’s like an industrial touch that we actually quite like and it will remind us of the changes made.

So our old entrance was through the veranda, on the side of the house. It still dated from the original bastidette and so did the front door.

Seeing as we wanted to claim the part that was veranda to open the living room to the light and have the suncome in, the old entrance had to go.
But a home really needs an entrance (if it didn’t, we would’ve frankly prefered doing without). And it’s our builder (I told you he was great) who found the solution. By moving a window opening and also moving a load-bearing wall, we were able to place the entrance between the guestroom and the new living room. The front door is now on the south side of the house, where you actually arrive by car. So it’s even more logical.
It’s open to the living room and in the rising roof we had a skylight installed, for even more sun/light to get in. The built-in storage that we had done isn’t quite finished yet, but it should stay pretty simple and neutral, as far as style goes.

It’s funny because we had discussions and got lots of informations as to what windows we’d have for the living room, but as for the front door, we had not thought of specifics. It was by chance really that one day, at our window supplier, we chose it. It was installed at the same time as the windows, but it was only after the painting, when we removed its’ protections that we really realized that we actually like it so very much.

When starting this project, we started with the idea of steel for the windows, especially for the huge trapeze window. We really liked the look and felt that it would make for a welcome contrast with the existing PVC windows.
Unfortunately, we quickly understood that our budget (already stretched out) didn’t allow us to embark on luxury spending like that.
To avoid the interminable maintenance of the wood, we therefore decided on aluminum. The energy performance of this material reassured us and let’s be frank, the prices did too.

So, there’s a non-opening window to the south, from floor to ceiling, to have the sun in the living room in the morning. In the same room there is the huge trapeze window which is absolutely the “icing on the cake” of our renovation. It makes us feel as if we’re outside and it will so absolutely fulfill our wish for more light and sun inside.
Perpendicular to the trapeze window is a glass door to be able to go out on the terrace. Logically, we have chosen to extend the glass opening of the ‘trapeze’ and so the part over the glass door is window as well.

For a touch of original, the aluminum of all new windows is in the color ‘rust’. Black seemed too modern, too harsh, for the style of the home and white … in fact, we never even considered white as an option!

If you read yesterday’s article on the groundfloor bedrooms, you’ve read that the floor has had the same treatment everywhere on the ground floor (apart from the kitchen). It’s an anhydrite screed with a béton ciré style finish (with thermal underfloor heating).

I admit that when the artisan ladies worked on their colour patina, the wow effect was even greater in the living room.
During Covid lockdown, we had already enjoyed the underfloor heating. The rooms on the ground floor were used temporarily as home offices and study rooms. And I would sit down to do yoga by the window, in the living room.
But to also see the look of the place become ‘warm’ with the shades of sand we asked for. And to finally see what our future home will look like, really … it was magical.

Before, our living room had a reddish tiling, too dark and so cold. But this new floor was everything I had been dreaming of. My moodboard had come to life and it was better even.
The floor has kept the raw side of the screed (with small holes, waves of the poured cement, etc.) but it has a very soft touch to the feet and a soft look with the colour patina we wanted.

This chair, that was up in the living room before as well, just had to come back in our new interior. But with the ceilings at heights between 3 and 5 meters, it seemed not very accessible to DIY-dummy’s like ourselves.
Fortunately, our builders were amazing and they made us a special fixture around a beam, before plastering the ceiling. The ratan hanging chair is facing the sofa and when you turn it, it faces the reading niche too.
It’s perfect!

As far as decorating goes, it’s like everywhere else, we doing it little by little.
Before everything started, we got rid of quite some stuff. The large armoire that was in the living room before, no longer has its place now. So we put it in the guestroom.

We have invested in lighting though, because well, you need light don’t you? With our living room being bigger than before it was necessary anyway.
Also, at the moment I’m working on a gallery wall with new posters etc.
And I’ve been doin some sewing to make cushions and plaids.

The wall with our old brown couch will remain as empty as possible because at the end of the day the shadows of the trees outside form a free artwork of nature that is just gorgeous.

I am often asked on Instagram etc., if we’re not changing the couch (we bought it 15 years ago) and I have to admit that I would very much love that. But to be honest, it’s not a priority and for now there’s just no budget. Same thing for a coffee table, we didn’t have one when the the kids were little (so they could play) so we’ll do withoout now as well.
I’d like to think it’ll make it possible to luckily find nice things as we go along (garage sales, flea market or elsewhere).

So much for this side of our living space!
Tomorrow I’ll tell you about the other side, that is to say the niches around the woodburning stove, the dining room and the workplace.